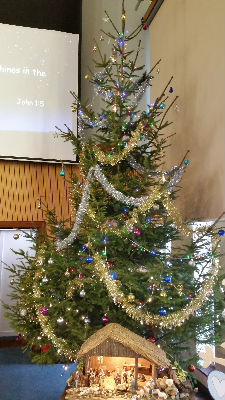 Our Christmas morning service was well attended with many families and friends re-uniting and coming to Church.  More small children than ever came to show presents they had received and using our in-house video cameras connected to our projection system meant everyone could see it all!

We held our customary midnight communion service and this year our Minister Andy used a contemporary Christmas communion liturgy as a change to our usual Methodist one.  It was a really special moment sharing the peace as Christmas Day arrived and the central Advent Candle was lit to mark the beginning of the day.

Every year, Churches Together in Leamington a 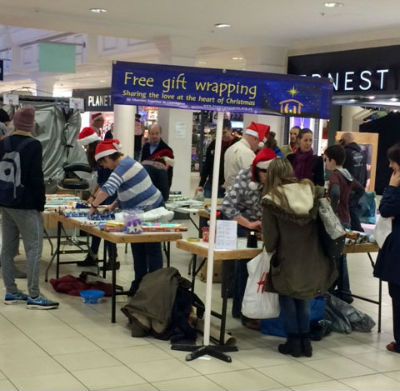 ssemble small teams drawn from across the town’s churches to offer free present wrapping, and ‘chocolates while you wait’, to late night shoppers in the Royal Priors shopping centre on the last three Thursday evenings before Christmas.  Many shoppers are taken by surprise at this free service and want to give money, which we refuse to take.
It really moves some of them when we say, we’re doing this to show you that you are loved.

We hold this service usually two Sundays before Christmas at 4.30 in the afternoon, this year it was led by our Minister Andy. The church is set out café style, encouraging families to sit together around a table and talk to each other and work together when it comes to building the Christingles.  A great fun time was had by all, helped along by mince pies, cakes and hot and cold drinks.  In 2015 this will be held on 13 December, why not put the date in your diary now?

On Sunday 23rd November the Monday house group helped to lead the morning worship. We thought about the various subjects we had covered in our bible studies - eventually deciding on Psalms. The final product, however, had a prayer focus.

As it was ‘Stir up Sunday’ we involved the children in stirring up the ingredients for a Christmas Pudding and making a wish. They were encouraged to think about what they had done, (eg shoeboxes, Children in Need) and could do for others.

This theme was continued in our intercessory prayers and an opportunity was given to write an ‘offering’ which was collected and dedicated with our monetary gifts.

Andy offered to run another bible study if people were interested and the Monday group would certainly be happy to recommend this. 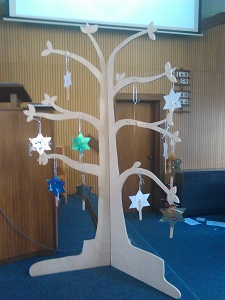 Congratulations to the children and young people who reminded us of the people of God on the first Sunday in Advent. Junior Church demonstrated the faith of Abraham and hung stars on the Jesse Tree to represent his descendants. “It’s a Youth Thing” used a ‘magazine’ theme to tell the story of Ruth. This was a happy occasion and it was good to see so many young people involved. 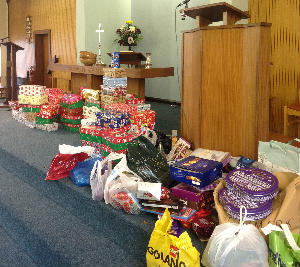 A wonderful collection of gifts brought to the Gift Service in November. As well as the amazing collection of shoe boxes for children, we remembered adults and families here in Leamington. Some of the edible gifts were taken to the local Foodbanks, added as festive treats to the food parcels given out to families and individuals during December. More treats, as well as toiletries, socks and hats were taken to the Way Ahead drop-in centre, and wrapped up to be given to the folk who come to the Christmas Day lunch. 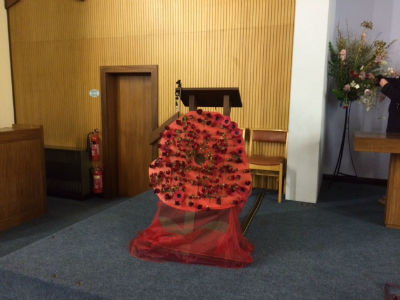 The lead up to Easter Sunday was marked with a series of thoughtful services and on the day itself a happy breakfast was shared by about 50 people before the joyous morning service.

Our first Play and praise of the year was very well supported and focused on Bodies, exploring the theme through a range of craft and play activities, with the short worship using the healing at the beautiful gate.

We started the year with our Annual Covenant Service.  A new Home group was started, following a series of sessions using images from the Methodist Art Collection.  The group grew in size as the series developed.

Dads and Tots restarted, reaching double figures for the first time – we had to go and buy extra bacon and eggs! 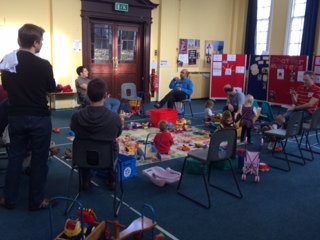