We held a Christingle service on the afternoon of 13th December, it was café style worship with tea and cakes available as we learned the history of the Christingle and then made some for ourselves. Finally they were all lit as the Church lights were turned off. The light of the world illuminated the Church!

We again held a traditional service of 9 lessons and carols, with some items performed by our choir.
The readings told the story and we sang in response.

Our Christmas Eve communion service was followed on the great day with a family service and a packed Church. 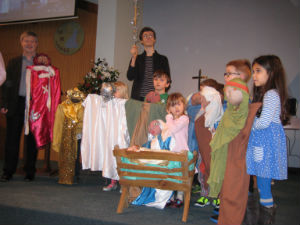 During the service Andy involved young and old in putting on a ‘scratch nativity’ performance, with the aid of specially made puppet dolls. 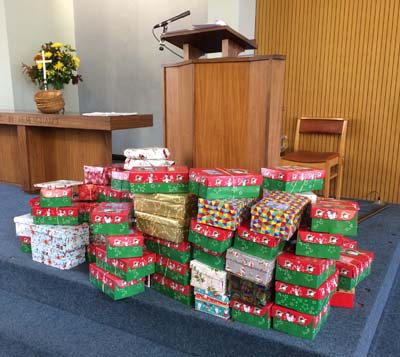 It's a good job that Minis are bigger than they used to be.

If you had asked me before the Gift Service "How many shoe boxes can you fit into a Mini?", I would have said around 120 since we had 114 last year and they only just fitted.

This year we collected a grand total of 133 boxes!

My little car was very full; thanks everyone for such a great effort! 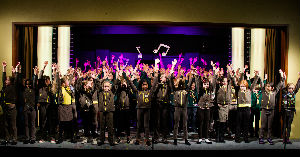 November provided us with our biannual treat (at a different time of year) - Daley Sketches. 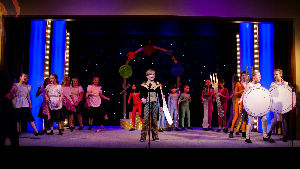 Our young people, ranging from Rainbows to Network, entertained us with songs, sketches, dances and jokes!
Old favourites were reprised and topical shows adapted. What a variety of talent! 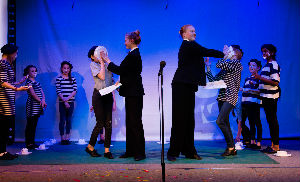 The energy, enthusiasm, working together and working hard is what Guiding and Scouting is all about. Well done, roll on 2017. 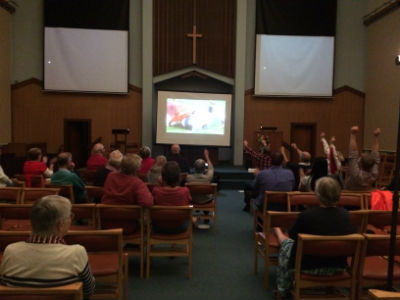 Dale Street is now able to display broadcast programmes on a big screen in the church and about 30 people enjoyed the opening game of the 2015 tournament - England v Fiji.

The evening was a great success (even the result was right for most people). This should provide a pointer for future occasions when a broadcast event is best enjoyed in the company of others. 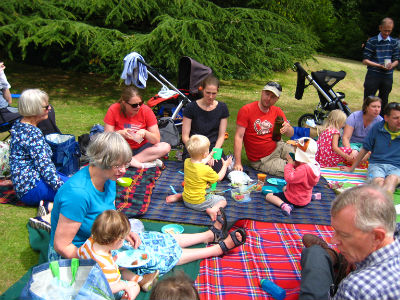 On Saturday 1st August around 25 Junior Church children, families and friends spread their picnic mats out on the lawns of Jephson Gardens. It was a fine sunny day with the added attraction of ‘Art in the Park’ to keep the picnickers amused when the food ran out!

It was great to share and catch up together in a way that it’s not always possible to do after a Sunday morning service.

We all had a great time and look forward to getting out the picnic hampers again next year. 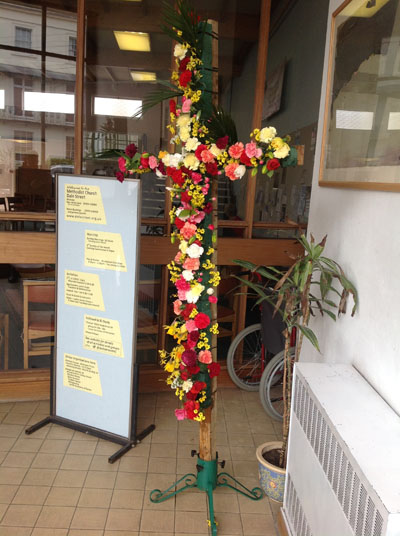 As usual, we enjoyed a shared breakfast before the morning service.
We continued our tradition of transforming the cross (which received symbols reflecting the last period of Jesus's ministry during Lent) into a cross of flowers.

Upside Down and Inside Out 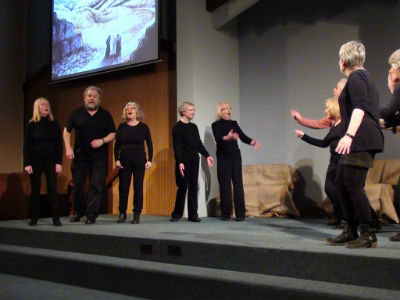 This seasonal musical by Edmund Banyard and Mary Bishop-Hunt was successfully repeated at Dale Street after several years. 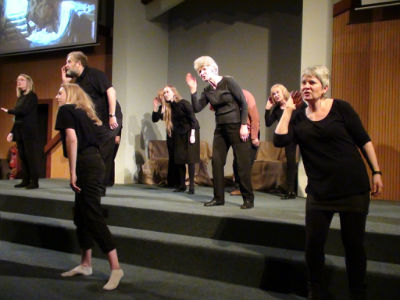 The musical invites us to contrast our Easter Holiday enjoyment with the events of the original Easter story and reflect on what Easter is really about.

Three house groups used material provided by Rev Andy Laird.
In addition the Wednesday group completed a study on The King’s Speech.
Here is a small extract from the hand out in week 3 to ponder over the summer.

We have nothing to give that has not been given.
Even our lives are a gift. This puts a whole new perspective on ‘what we should give’ out of our riches.
Giving to the church, of course, is not the only part of our giving.
The bible teaches giving as ‘to the Lord’, and that must also include charitable giving as well as church giving.
The principles of that giving though include:

What is my version of the four themes above and how can I go about meeting them?

Giving is not just about money, what else could you give? 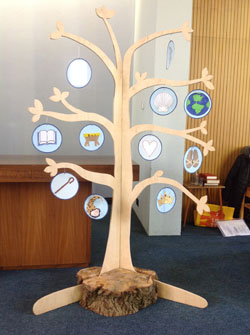 nown people from the Old Testament and is a sort of family tree for Jesus. Jesse was, in human terms, his many greats grandfather. Some people hang an object on the tree each day during Advent.
We chose to hang an object each Sunday and followed the traditional Advent candles theme – people of God, prophets, John the Baptist, Mary and the birth of Jesus.

In some traditions the Christmas season continues until Candlemas so it was decided to continue our Jesse tree until that date.

Pre – Christmas covered the forerunners of Christ.
Post – Christmas continued with what came after.
- The shepherds, who gladly witnessed to the birth of our Lord.
- The magi, who came looking for and found a king.

On Covenant Sunday we remembered John Wesley whose conversion at Aldersgate Street inspired him to share that sense of peace and joy with others.
We continued with the great commission which Jesus gave first to his own disciples and which was then taken up by Paul who continued the work of mission to the Gentiles. In the New Testament (Matthew 25) Jesus tells us about our actions towards those in need – “whenever you did this for one of the least important members of my family you did it for me.”
Our final object on the Jesse tree was a mirror which reminded us that by our words and actions we reflect the grace of God.