People dropped in and out to sing carols and to eat mince pies with their tea. In fact many stayed for the whole session which was somewhat of a marathon of no fewer than 22 carols and nearly 100 verses. It was a delightfully informal occasion. 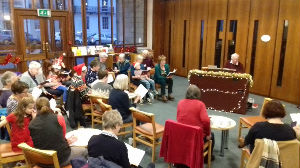 At the Sunday morning service next day, Jemima Strain presented the complete nativity story through a similar number of carols, though this time there were never more than two verses – and through a lot of chocolaty puns and much throwing of chocolate bars round the church. They say that people remember events, not routine!

On Christmas Eve there was a Konect 4 event with yet more throwing, this time a Pass the Parcel with more chocolate and lines of prayers enclosed in the layers. We wished each other happy Christmas at midnight communion and next morning the children presented their presents with aplomb and the service ended with Graham Howe’s God gave a present.

So ended a memorable and lively year!

This famous group of costumed singers and instrumentalists originated in Warwick and has revived the traditions of singing in rural parish churches in the eighteenth and nineteenth centuries. During an excellent evening, they performed no fewer than five versions of While Shepherds Watched. The link with the 200 years project was one Thomas Jarman who was sent to Portland Street in the nineteenth century to improve our Methodist singing. The instrumental treat was some fine bass playing from a real live serpent (see Google, ‘serpent instrument’ and see below to the director’s right). 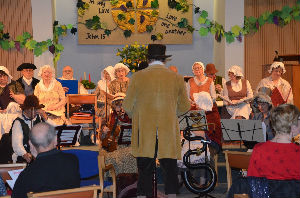 Go to www.immanuelsground.com to find out all about the quire.

This was not the first time recently that Dale Street had seen ancient instruments – a week before the church resounded to a day's Christmas music workshop with a bass viol, a curtal and a sackbut.

Peter was a local preacher at Dale Street for many years until moving to Oban where he is now a locum minister with the Church of Scotland. He returned to talk about the history of Leamington from its early days as a settlement at the south end of the present town, and how the various non-conformist groups built their churches as the place developed. As schisms happened and were healed, many of the churches were abandoned and the buildings were either changed into dwellings or factories, or were demolished.  Our church started life in Barnacle’s Yard off Satchwell Street, a less salubrious part of the town. It is now buried under the Priors Shopping Centre. Then, as member ship grew, It transferred to a building in Portland Street, which still exists. Growth continued and a school was added until it was necessary to move again, this time to Dale Street where the new church was thought at the time to be too big. Ironically, when this church was demolished, the council expressed surprise that its replacement was so small! 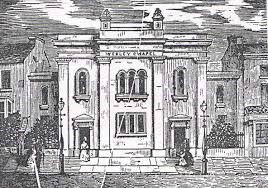 Peter illustrated his talk with many interesting details, such as the public tea-drinking meetings. Joseph Arch was a celebrated local preacher who held a meeting when the church in Portland Street became an assembly hall – he had not expected the number of people who attended, which appears to have been a record for its time. 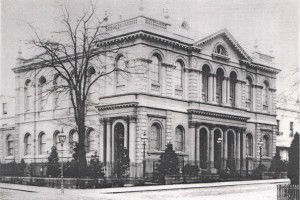 There are still people who remember the last service here when the choir sang two anthems. The organ was preserved for use in the new church, although there was a new console and electronics. It was re-voiced to suit the new, smaller building.

On Sunday 26th November, Peter was the visiting preacher and marked ‘Stir up Sunday’ with the collect, ‘Stir up the wills of the faithful people to bring forth good works’. For the children he had a bowl and a wooden spoon and told them that it was stirred from East to West (like the journey of the wise ones). The thirteen ingredients represented Jesus and the disciples. The 5p coin was probably a health and safety risk so would be better as a pound coin!

This weekend was a happy and enthusiastic one, and the lively singing on both occasions helped to make it so.

The church was full of the uniformed organisations and their parents for this annual collection of presents contained in brightly decorated shoeboxes and destined for anywhere in the world.

Graham Howe introduced the proceedings with a quotation from Ecclesiastes, ‘Anything you can turn your hand to, do with what power you have’.  Indeed the scouts had done just that, raising £900 for their charities in a sponsored swim. But wait a minute – what were cubs doing wearing seven dwarves’ masks?  It was all about personalities, and we watched a video of the guides demonstrating different personalities in a very ordinary setting. Maybe like the dwarves we were hardly perfect (who was grumpy?) and we sang a song to Graham’s words about it. In the case of Snow White it did not matter because they all teamed up together to keep her safe. We watched as the scouts completed their team building challenge, making the shoeboxes into a wall.

Graham retold the Snow White story and showed how everyone, whatever their shortcomings as personalities, worked together for good.  How did this fairy story relate to our life as a church?  All our different personalities were there to make up the whole picture until, as Graham put it, our Prince, the Lord, came for his bride.

(Did you know? The number seven in the Bible indicates perfection.)

If you walked into the community room you would have seen tables brightly laid out for a meal of sausage pasta and macaroni cheese – and you would have heard frantic noises of excited children coming from the hall. Enter the hall and to your left there was a dark cave erected in one of the adjoining rooms – full of excited children. Around the hall were more tables with activities such as playing musical instruments, producing pictures of fires in a wind, or making faces with play dough. Suddenly the organised chaos came to an end and the children sat down with a remarkable degree of attention to listen to Roger telling (not reading) a story – and then the eating! 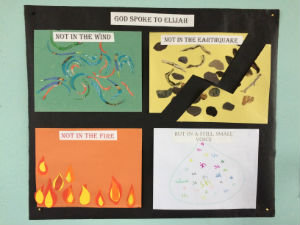 It was so well planned, and such a lot of work had gone into making it work. The Mums and Dads seemed to be having just as exciting a time as the kids.

Although the uniformed organisations held a quiz and pizza night at their AGM the day before, some 40 quizzers turned up to form 8 highly intelligent teams. Nothing daunted by dingbats, flags of Europe, questions about the Olympics, pictures of 35 celebrities and some dodgy fitting of football teams into a highly improbable story, Dale Street and their friends proved they were not just good- looking faces. Scores topped the hundred mark and the winners – the Selby family – scored a huge 131. It is worth noting that they also came second the night before.   Team names included No idea, The Drifters, Quizzicles and the Misfits. Generation 3 were not the only team to field Grandparents, parents and grandyoungers. We were so keen that we carried on quizzing while we ate our pizzas and at the end, one Year 8 was heard to ask when the next quiz was going to be. Much praise to the Whitehead family who organised this high-quality mind teaser of an evening which raised over £250 for Action for Children.

200 years of Methodism in Leamington Spa

John Wesley tells us to ‘sing lustily and with a good courage. Beware of singing as if you were half dead or half asleep, but lift up your voice with strength’. So it was that a sizeable congregation came together to do what Methodists do famously, sing (in this case) ten mostly well-known hymns and songs.

Three of our local preachers chose readings from the Bible and explained what they meant to them, and Andy Laird closed the service by warning us to be active in spreading the light. He also referred to the Churches without Walls initiative that this circuit intends join in a year’s time.

Most of the songs were stalwarts of Methodism, which was appropriate since 200 years ago the notion of singing them was still modern, and many tunes were unashamedly secular. So at least one of the tunes, to Thine be the Glory, was written in the eighteenth century and the rest stretched through the ages as far as  the present time, with two Townend and Getty songs and also Give thanks to the Lord our God and King. Just one, StF407, Hear the call of the Kingdom, was less well known and caused some interest owing to its crusading, rhythmic style.

People love to come together and sing, and maybe we should give ourselves the opportunity to do this more often. It was a good example of what fellowship means. 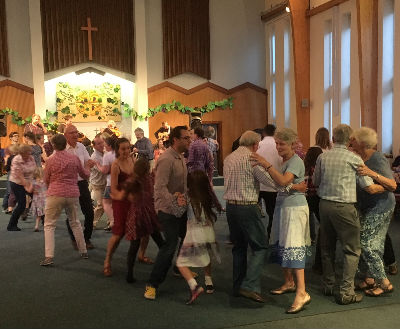 What a great event! Nearly a hundred people danced to the Dan Bones Ceilidh Band with Dan’s proud father Pete as caller. The church was cleared (there would never have been enough room in the hall) and the celebrations overflowed into the Community Room. The children danced too, and then the fish and chips!  The St Johns Fish Bar of Warwick certainly lived up to its reputation and supplied 92 portions – this was followed by apple crumble and ice cream. Since this was harvest, what better than our own mouse, a ‘wee, sleekit, cow’rin beastie’ taking cover behind a piano and after a good half hour of kindly poking, disappearing we knew not where?.

On Sunday the church was back to normal – no fishy smells – a big congregation heard about the many efforts of our uniformed organisations to serve in the community. With Konect4 in the evening It was a grand weekend.

As part of our celebrations of 200 years of Methodism in Leamington Spa we welcomed the Reverend Ian Howarth, Chair of the Birmingham District and our Member of Parliament, Matt Western. Ian amazed the children (and most of the rest of us) with his two everlasting candles that represented the 200 years of Methodism and also the inextinguishable light of Christ. He spoke of the tradition of maintaining the light and not the ashes.

Coming so soon after Sam McBratney’s recent sermon, we were left in no doubt that the wind of change was blowing through Methodism. 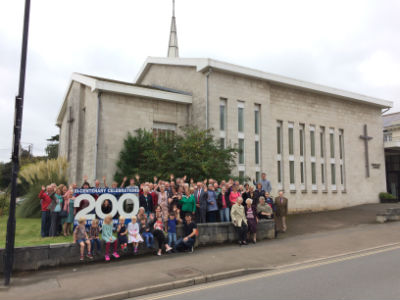 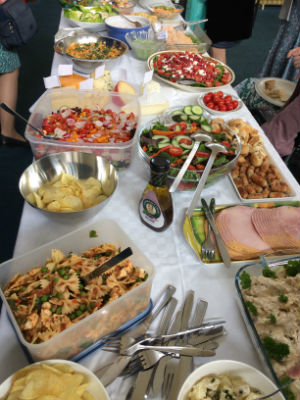 and then to one of our traditions – an excellent bring-and-share lunch.